The main purpose of Classical Test Theory within psychometric testing is to recognise and develop the reliability of psychological tests and assessment; this is measured through the performance of the individual taking the test and the difficulty level of the questions or tasks in the test. Reliability is calculated through the individual’s score on the test (observed score) and the amount of errors in the test itself (error), and together these give an indication of what the person’s true score would have been without the errors in the test measurements. Errors can occur through mistakes within the process of testing, as well as everyday malfunctions such as being tired, hungry, etc; but if a standard error can be found then it becomes easier to factor this out of the equation.

How Is It Used?

Charles Spearman was one of the founders of this classical test theory, having an understanding that there were generally always going to be errors in test measurements, that these errors are random variables, and finally, that they could be correlated and indexed. It is hoped that through these correlated errors, improvements can be made, therefore reducing these errors and increasing the reliability of the tests. A higher test reliability would yield more true score answers, which is essentially the main aim of the classical theory, and is a more valuable way of finding the correct candidate for a job. Classical Test Theory is rarely considered by individuals taking psychometric tests or the companies using them, but is essential in its uses, as there is no point in a test that has to be highly scrutinized for errors before the candidates’ responses are even measured. It is also important to have high reliability within tests, simply for the fact that companies do not what to waste time or money on using a test to gauge future employers, if the answers do not relate to anything or give any indication of job performance. 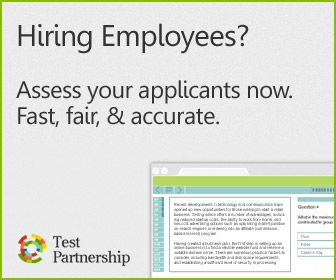 For tests to select employees you can use Test Partnership.